After a month of prodding and deletion of non-notable albums by non-notable bands on a non-notable label, Wikipedia is once again Serious Business.

I've discovered a paint program called Colors! for the DS. I managed to draw this: 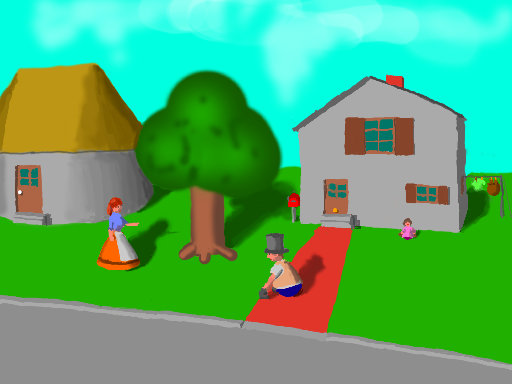 You can even play back the sequence of brush strokes on the picture's page on Colors! Gallery.

I've updated several of my mini-essays in RAnT to match the state of the world in 2007. It and the GBA, NES, PC sections have also been migrated to the new layout.

The site is changing to a newer, cleaner look and feel. It has these benefits for readers:

The transition will happen page by page. Pages that have not updated will still use the old look and feel.

Chester is in the wild world now. Mr. Resetti admires his anti-cheating ethic.

Oh wait, back up a minute. Did I just say Mr. Resetti likes someone?

Pino and Chester wrote a 200 line FAQ for the mission of buying your house in Animal Crossing. It is designed for the GameCube version; the techniques should also apply to the DS version. Here's ACPG: Abundant Cash Player's Guide.

We are on the new server. Please mail me if you find broken links or other defects.

I beat Animal Crossing, having paid off my house yesterday. Pino woke up this morning to find a golden statue by YoshiX station. Chester, not wanting to be one-upped, became more determined to get his own statue by Chadonn station.

And my Tetris dreams are getting cleaner. In my latest dream, I met Alexey Pajitnov, and all was friendly:

"My game?" He sounded surprised at the recognition that Tetris was his in a sense, given my reputation as a cloner.

"On the Nintendo version it has your name across the first screen: Alexey Pa-something."

He taught me how to pronounce the surname.

"I know you created Tetris; I just dispute your exclusive right to its rules."

And the conversation went off a different way.

GeNext is going out of business

I may soon be switching web hosting providers again, as my current provider plans to get out of the hosting business.

I have been playing Animal Crossing for GameCube. No, I don't want nor need an X-Square-Circle (Xbox 360) to play Piñata Crossing; I have enough work as Pino@YoshiX. Nor will I try any of the Harvest Moon games until at least Harvest Moon (September 26).