XHTML Considered Harmful. Again, Microsoft Internet Explorer is holding back the web, this time because it does not understand XHTML. This site has gone back to HTML 4.

The NES section has been relaunched.

Victory! The European Parliament has amended its proposed patent directive to exclude most algorithmic inventions. Let's hope this spreads to the States.

In other news, I'm working on a new version of the 8ad codec for GBA. This new version will include a frontend that can play 8ad files in one ROM, support for audio conversion and resampling through Sox, and included Windows binaries. I'm also working on a new codec that should give good quality with even fewer bits per sample, by using a dynamic second-order autoregressive model that should allow better prediction of the next sample. Similar techniques are used in Shorten and FLAC; I'm adapting them to a lossy ADPCM framework.

The European Parliament had considered enacting a measure that would allow the European Union to grant monopolies on algorithmic inventions. Amid massive demonstrations against this measure, the EP has postponed the vote until September 22. Once the measure comes to a vote, my protest page will change depending on whether the EP approves or rejects the measure.

On that note, I have quit the RC5 project hosted by distributed.net for two reasons: brute force is wasteful in that the expected winnings for a given block are much less than the cost of the electricity used to process that block, and just as importantly, the project's whole goal is to quantify the effectiveness of the RC5 symmetric cipher, a proprietary algorithm which is under a grant of monopoly in the United States (U.S. Patent 5,724,428). I encourage the use of open standards such as AES or triple DES instead of RC5. I will continue to use my computers' spare CPU cycles for distributed computing that benefits public research, such as distributed.net's search for optimal Golomb rulers and the Seventeen or Bust search for Sierpinski numbers.

If you have been getting errors relating to 'chr.h' or 'text_chr' when compiling AGBTTY , please download the updated version I just uploaded. If you still have problems with AGBTTY or 8ad, please read over the text files included with the distributions; you may have to compile some programs natively and run them before you compile the GBA ROM.

Within the next week, the GameCube Game Boy Player comes out in the States.

I get so dang distracted by my work on tools that I forget to work on packaging TOD itself. That said, the 8ad audio codec for the GBA is now available. Unlike some other audio codecs, this one isn't expensive; in fact, it's free software.

Some have asked me why I use XHTML 1.0 Transitional rather than XHTML 1.0 Strict. The primary reason is that XHTML 1.0 Strict inherits a fatal flaw from HTML 4.01 Strict: the value attribute for li elements has mistakenly been deprecated with no replacement in CSS. This gives no way to start an ordered list at any index other than 1, a, A, i, I, etc.

Disney/Pixar's Finding Nemo is in theaters across the United States. Don't see it, for these reasons. If you have to see it, wait for the video.

Instead, please sign this petition to help reclaim the public domain by requiring copyright owners to pay a small maintenance fee beginning 50 years after publication of a work.

The Eric Eldred Public Domain Enhancement Act is coming along nicely. If you live in the United States, please ask your representative and senators in the U.S. Congress to be the first to introduce the bill. Don't let our nation's works of writing, visual art, and film deteriorate into dust before they can be preserved.

The Windows version of Jason Wilkins' DevKit Advance, the most popular GBA-targeted distribution of GCC, was upgraded to R5 beta 3 a few days ago. This is the first R5 beta that compiles my project.

Life is beautiful. I have submitted my entry for DDRei Tournamix 4, but you won't find it online anywhere until sometime in June.

AGBTTY 0.1, a text output module for the Game Boy Advance, is now available.

The banner has disappeared because I've realized that nobody wants to advertise on this site.

Anyway, I've been addicted to DDR (not RAM, not the former communist country, but a dance simulator) for the last few months. I have my own dance pad, not the fold-up kind but the kind with foam sections. But I still can't pass 9-foot or harder songs; my legs freeze up halfway through if I try.

Jason Wilkins has finally got around to updating DevKit Advance once again. As soon as some bugs in its linker are ironed out (I can't get it to put the audio mixer in fast RAM), I'll release a new version of TOD.

With my reorganized CV in hand, I now resume looking for a job.

Oh, and first post. I released a port of Dr. Mario to GBA before Nintendo did. Take your Vitamins today!

I just discovered something today: Pawn shops are a good source for used compact discs and an excellent way to become legit after having used the WinMX peer-to-peer file sharing network. If you use P2P networks to "try before you buy", I'd suggest to buy the CD used after having pirated three tracks. (But if the pawn shop doesn't sell chess sets, why is it called a "pawn shop"?)

If you live in the United States of America, please ask your representative and senators to co-sponsor Rep. Lofgren's BALANCE Act, a bill that would take a bite out of the DMCA in order "to safeguard the rights and expectations of consumers who lawfully obtain digital entertainment."

I'm releasing some of the utilities I used to make a GBA project. So far, I've packaged GBFS and 8TED.

Turns out I misspelled something on my civil disobedience page, as Mark J. Tilford (tilford@u...) corrected me in an e-mail:

The author of _The Benson Murder Case_ and _The Canary Murder Case_ spelled his pseudonym S. S. Van Dine (i instead of y). His real name was Willard Huntington Wright, if you care.

It's been a while since my last update to the GBA section, and this update is over a legal issue. The license for the GBFS package now allows use of my PC-side code in GPL'd plug-ins for Photoshop and other image manipulation programs.

Please support the Eldred Act to require the owner of a copyrighted work to identify himself or herself or lose the copyright. I find it much more sensible than the Bono Act.

I'm still bummed out about the Eldred decision, which some copyright term reform proponents have compared to the Dred Scott decision that set up the Civil War. So I thought it would be nice to dig up some dirt on the company we love to hate.

What exactly does The Walt Disney Company own? Not Mickey Mouse. This article explains how a faulty copyright notice on early Mickey Mouse movies may have inadvertently put Mickey into the public domain. 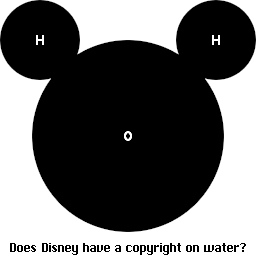 If Disney owned the stylized mouse head logo, then we'd all die for lack of water.